Localizing the supply chain is tricky business for brewers. Ingredients tend to be regionally restricted,  few regions have both supply and demand, and quality and consistency are important for brewers and their products. This post reviews some of the hurdles and successes within sustainable sourcing trends for craft brewers in relation to sourcing of key ingredients.


For most craft brewers, their supply chain is organized in a traditional fashion (commodity based) and is managed independently (in-house) and can span many borders.

Routers recently took a deep dive into how the new US Administration's promise of a Mexican Product Tax and possible removal from NAFTA would impact the brand. To complement this, VinePair created the following map of Coronas supply chain to help visualize the American intensity of its operations.

Great Lakes Brewery shows within their 2015 Sustainability Report their topmost sources within their supply chain. By locating these on a map, company stakeholders are able to visualize the extent of their internal operations. It also makes it easy to see how product availability can be dwarfed by the global sourcing network.

Many breweries are shortening their menu supply-chains by purchasing from their local “food-sheds”. Some make it a very strong part of their culture, like Brewery Vivant’s local purchasing goals.

Within the craft beer segment brewers are incorporating various locally and seasonally available ingredients to provide unique flavors that represent the local offerings. We see pumpkin, maple syrup, apricot, honey and so on. This is a good effort to increase the overall local content of a brew, but this alone will not lead to the level of sustainability we must aim to achieve.

Kent Falls Brewing had started with the goal of sourcing local and quickly learned this was not going to happen. They instead funnel the 20% Connecticut grown ingredients they can source into one beer, the “Field Beer”. Their Field Beer batches feature CT grown spelt, malt, hops, and house yeast cultures.

Just like Kent Falls, most brewers start with the intention but have to adjust and find the grower or malters themselves. There are quite a few brewers who start with one beer, and grow it from there, including or start with primarily local ingredients. Here are a few examples:

Oregon’s Rogue has a number of farms for their hops, rye, barley, and even jalapeños and pumpkins!

Check out the Rouge Farm Blog for more details of their growing operations.

Standing Stone Brewing Company has a unique way of communicating their percentage of local ingredients within their beers and their menu.

Barley production in the US can be found to some degree in about half of the states.

However, there are some encouraging efforts to grow relationships between farmer to malster to the brewer, including through legislation.

In New York State, The Farm Brewing Law was passed in 2012 and put into effect January 1, 2013. It is designed to increase demand for locally grown products to further increase economic impact and create new businesses surrounding the brewing industry. In order to receive a Farm Brewery license in New York State, the beer must be made primarily from locally grown farm products. And the progression towards local agricultural sourcing this law takes is impressive! The schedule for the license is as follows:
The beer manufactured under these guidelines is designated as “New York State labeled beer.”

This map of NY Malters, Farms and Breweries makes it easy to understand how the schedule for license requirements is realistic.

So far … it’s not a perfect system … Disease is a very real set back and impacts the system significantly, luckily for some the federal government has stepped in with insurance eligibility for barley growers. Still, breweries are not yet fully required to purchase from NY. Canadian and Australian barley can be cheaper and brewers are not big fans of the primarily 6-row barley that grows well throughout NY. 2 row is coming along… and Cornell is involved… but we are just not fully there yet (2 Row VS 6 Row). As much as the intent of the Farm Brewing Law was to support local agriculture, it may cause for NY beer to be more expensive than it’s neighboring states as the price of barley varies (up in 2016) but has most recently fallen due to oversupply, giving out-of-NY brewers a potential short-term leg up.

Of course, you can have all the barley in the world at your door step, but if there are no maslters… then you're f*cked. Securing the long-term viability of the farm to malsters to brewery relationship is likely one of the biggest concerns for the long-term sustainability of the craft brewing industry (just look at the Brewers Association’s 2016 Funded Research grants list).

Since prohibition the American malsters have slowly (painfully) been making a comeback, in the meantime, Euro maltsters are still enjoying their long-term exporting of product.

Crisp Malt is just one of many that export to brewers around the globe (map source).

While most states don’t have a “Farm Bill” that supports their breweries, and let’s face it these bills are based on an imaginary state line, there need to be organizations that help to connect small maltsters with small to medium sized brewers.

In steps people like Phil Neumann of Mainstem Malt to help put the right malts in the right hands. Mainstem Malt specializes in connecting barley farmers with a strong ability for preserving water quality and conserving water resources to brewers who want to demonstrate that their supply chain has protected the natural resources it depends on. Furthermore, Mainstem is pending B Corp certification and working with farmers to achieve Salmon Safe certification (read more about Mainstem Malt in my interview w/ Phil).

There are more and more micro-malsters popping up all the time, small list:

As mentioned in the barley section, New York is gaining some traction in building sustainable supply chains. One great example can be found on The Bind Yards website they show how they fit into their customers supply chains. A great example of using transparency as a sales pitch. 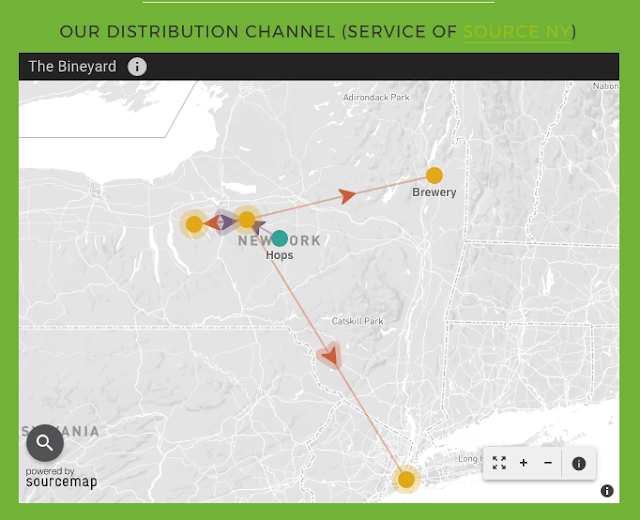 Similar to how the beer industry has influenced legislation to secure local sources in NY, craft brewers in British Columbia and trying to grow and secure local hop (and barley) sources (on farm breweries to be exact) and are encouraging legislative amendments to help this process along.

The well-organized effort is attempting to have the BC Government revise Agricultural Land Reserve Regulations to ensure the feasibility of farm-based breweries growing agricultural crops, including hops. Check out the effort here. A thorough feasibility analysis was undertaken complete with working business models for small-scale commercial hop farming in BC. A few of the resources include:
1. The Current Market for BC Grown Hops
2. Assessing the feasibility of small scale hops farming in BC
3. Developing a business plan template for a small scale commercial hop yard
4. Performing outreach and communication of the findings from this project


Support this effort by signing their petition now!

Using the USA National Hop Report, YCCHOPS.com had sifted through the data to produce some insightful graphs that reveal “the pattern we’ve seen for several years continues as aroma acreage increased (up 22%) and alpha acreage (down 2%) decreased in the PNW.”

From YCCHOPS.com:
“Cascade acreage strung for harvest increased 8% over 2015 and Centennial acreage increased 13%. Acreage of Citra®, Simcoe®, and Mosaic® increased 45% and now collectively represent 11,506 acres or almost 29% of the US aroma crop.”

No doubt, there’s a lot 'Hoppening' (argh, I know):
Localizing the agricultural supply chains have positive outcomes for the county and state economies and employment. There are some agricultural/environmental implications that add a further dimension to this conversation. Farmers, brands and consumers alike are concerned about climate change, about the preservation of farm lands for the future, about the chemicals and foreseen genetic modification implications of ingredients, and so on and so on. The agriculture environmental footprint has revealed... ( STAY TUNED FOR THE NEXT ARTICLE, link will be posted here)